It all started at the age of 13 when my eyes were opened to the new electronic sounds of Jean Michel Jarre, Kraftwerk and Giorgio Moroder, along with the energy of the new wave and punk sounds of the late 70s. Almost overnight I became a vinyl junkie, raiding the bargain bins of all Canterbury’s record shops. I remember my dad accusing me of wasting all my money on singles and jesting that he’d like to see me earning a living with those blooming records one day. How prophetic! My extensive music collection is testament to this, and to this day it makes my knowledge of music vast and eclectic.

My first professional event was New Year’s Eve 1982. I was still at Art College and working as a part time silver service waiter in a 4 star hotel, when I overheard the general manager mumbling that he needed a DJ to support the live band for New Year’s Day. I jumped in, and the manager, suitably impressed with my set, asked me to become the hotel’s resident DJ. I’ve never looked back.

The Skyline Roadshow, which soon became mobile, grew into a sizeable business that was popular in schools, military establishments, wedding venues and hotels. Highlights from the 80s include: DJing for Henry Cooper’s birthday party, cross channel ferry parties, a television commercial for the Sunday Mirror (aired 7 times on a Saturday night), many roadshows for local radio stations, a gig right inside Canterbury Cathedral, and the usual marquee, hotel, village hall, youth club and leisure centre discos. I also self promoted several successful runs of ‘under 18s’ rave type events at various venues through the south east and DJ’d at night clubs, where I perfected my flawless vinyl and CD mixing skills. Check Mixcloud for some old mixes.

During the 90s, my interest in electronic music stepped up a gear and I set up my own recording studio, crammed with vintage and modern synthesizers, samplers, drum machines and recording gear, results of which can still be heard on SoundCloud.

Fast forward to Summer 2008, when my two older boys Luke and Matt (no, we’re not Bros fans!), persuaded their old man to get a new show on the road. So the ‘Groove Train Disco’ was born and new designs were made, which culminated in a giant jukebox rig that is still a popular choice with my clients.

The next pivotal point was to go full time (at last!), solely focusing on great weddings and becoming an expert wedding DJ. I invested in a white disco rig, which can be lit (and up-lit) in any colour that my clients desire, allowing a new generation of brides to ‘have their day – their way’. In addition to this I added a starlit white LED dance floor to the mix, along with a white tux, high power LED uplighting, white video screens, a sweet kart, garden games and various other services.

And now we’re in 2014 and my passion is at its height. I’ll never stop learning, never stop expanding, and I’ll always strive to be the best I can possibly be to give my clients the ultimate in wedding entertainment.

Your first dance song has to be unforgettable.

When it comes to your big day, one of the moments you will never forget is your first dance. So choosing that perfect track to symbolise your and your partner’s union, has to be absolutely perfect.

You can picture the conversations for years to come: “And what was your first dance song?”. 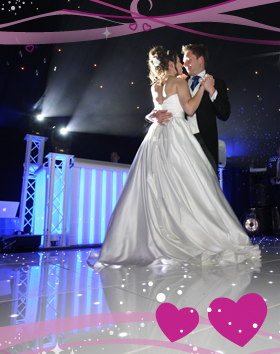 If you don’t have an obvious choice it can be a bit overwhelming trying to find one, let’s face it, there are plenty of options out there. Luckily I found this blog post by those lovely people at Arena Event Hire who have listed no less than 100 different choices.

All with a full description and a video so you can listen to them. You can view the article here.

The article covers a wide range of musical genres and we found that there should be something for everyone. And a word of warning – couples may have to set an evening aside for this task: It’s highly addictive. Viewing and listening  to all 100 will take quite some time.

I would love you to leave a comment below and let me know your favourites from the list.

And once you’ve chosen your important first dance, then you need t think about the perfect dance floor to perform on. Take a look at my LED Starlit sparkly dance floors, for the ultimate stunning first dance experience.

Or how about dancing on clouds – literally. Shallow clouds of dry ice swirling round your feet at you dance your first dance as husband and wife. 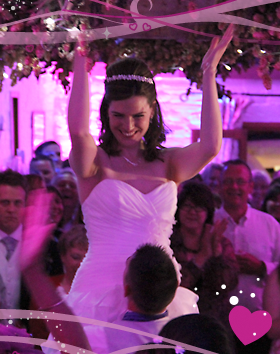 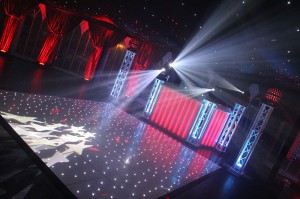 Welcome to my first post (or blog) on my brand new website. I made a recent decision to rebrand my mobile disco business, and whilst www.groovetraindisco.co.uk will still be up and running, this is the place for my specialist Wedding DJ Service.

My Mobile DJ History It all started at the age of 13 when my eyes were opened to the new electronic sounds of Jean Michel Ja...

Your first dance song has to be unforgettable. When it comes to your big day, one of the moments you will never forget is ...

Christmas Wedding with over 600 real candles The picture shows the preparations for a seasonal Christmas wedding in a love...

Have I stirred your interest?

Get in touch, because this is only a small part of what I can do to make your wedding the best one you and your friends have ever been to.